I have to confess that I am something of a skeptic when it comes to technology in schools. As the old saying goes, to err is human, but to really mess things up you need a computer. Just because a child is using a computer, it doesn’t mean they’re learning how to use one, and just because an application is advertised as educational, doesn’t mean it will teach anything useful. Working in a high tech industry, I’ve learned only too well that software doesn’t always deliver on its promise.

And I’m not the only skeptic in Baltimore County. Hang around in the Facebook group “Advocates for Baltimore County Schools” for a while and you’ll soon discover there is a vocal population of people who think computers have little to no place in school.

The reason they are so vocal is because Baltimore County Public Schools supply a laptop to almost every student in the public school system free of charge in a project called STAT, an acronym that means nothing useful. Of course, free of charge only means free to the students—the bill comes out of the school’s budget at the cost of other services that many people may feel are more important.

The program is controversial for other reasons. The contracts to supply the equipment and the maintenance services were awarded through a no-bid contract, and the superintendent who awarded the contract, Dr. Dallas Dance, later served time for perjury for not disclosing payments for speaking fees he received from one of the vendors. If all this is news to you, I’d like to be the first to welcome you to the neighborhood. It’s a lovely place, with mostly friendly people.

But on the other hand, I live with a passionate advocate of computers in schools who’ll sing their praises to anyone who will listen—my first grader. He loves machines of all kinds, and as far as I can tell the 30 minutes in front of his “device” everyday at school is as close as he comes to having a happy place. The county executive’s plan to reduce the student to computer ratio to 2:1 for younger grades permanently lost Mr. Olszewski a potential voter. Lucky for him my son won’t be able to vote until 2030. 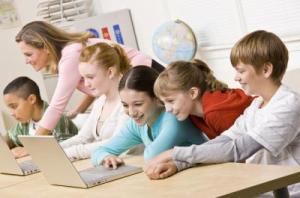 The fact that children like their devices—and my son is not alone in this—is actually a powerful argument in favor of the STAT program. If children are engaged by education technology (and what young child isn’t hypnotized by a screen?), they’re going to learn more than if they’re bored. Indeed, holding a child’s attention is a necessary first step towards teaching them anything. And there will be few jobs left that don’t require using a computer by the time he graduates, so he might as well get used to thinking of computers as a thing to work on instead of just a games console.

So is STAT worth the money? I took some time going through the arguments on both sides, and neither point of view is particularly persuasive. Let’s look at the arguments against first.

There are some in the county who would say that any tax money spent anywhere on anything is a bad idea. Such people should not be in charge of education policy. There are others who say that computers are a bad idea because they’re bad for children’s health. I don’t buy that argument either. Kids hunched over their computers for 30 minutes a day would otherwise be hunched over reading or writing. They may spend less time practicing penmanship, but they are spending more time working on keyboarding. Both are important skills for school graduates but neither practice counts as vigorous exercise. More say that children are at risk of getting addicted, but we grown-ups seem to be coping with our addictions just fine. And as for the idea that screens emit some dangerous blue light, well, some people will believe anything. The amount of blue light from a 15 inch screen is minuscule compared to the amount you get from spending 15 minutes outside in the sunshine.

Many are also skeptical of the program because of Dr. Dance’s consulting work for some vendors (the work he perjured himself to hide) and the no-bid contracts used on some of the contracts. While I understand the emotion of this argument, the question of whether we paid too much for the computers and software purchased so far is not an argument for throwing the machines out. If you discover that you paid too much for a new car, you might promise yourself never to shop at that dealer again, but you wouldn’t drop the car off at the junk yard just to prove a point.

The important question is whether the computers actually help children learn. The program was sold on both improving test scores and closing the achievement gap as measured by the MAP exams. It has a very clear definition of success. So, does it help children learn? Turns out, it’s too soon to tell. BCPS has hired a professor from the Center for Research and Reform in Education at Johns Hopkins to study the impact of STAT, and her biannual reports won’t try to fully assess the impact for another year or two. That said, the gains in MAP scores in the county since the program has been introduced are not dramatic.

As an experiment, STAT is still in progress. There has been no epidemic of ill-health since its introduction, but no large gains in test scores either. Many of the arguments against it are weak, but the program’s performance is not stellar either. STAT may be helping children become more comfortable with technology in less measurable ways, but equally the money might be better spent on more teachers or better pay. But given the time, money and effort spent on the program thus far, it seems rash to abandon the experiment now. So I’m still a skeptic, but I’m willing to give STAT a chance.

4 thoughts on “All We Are Saying, Is Give Laptops a Chance”