I remember the 1970s poster with the cat. 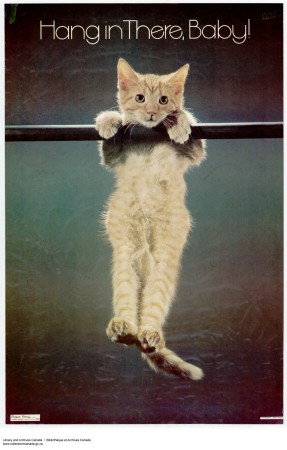 It was of course for purely inspirational purposes. No cat was harmed in the making of it. But it came to mind the other week in our neighborhood.

This was the week actually before the week that everything changed. We had received the first news of deaths in Washington State. We had heard of the first few confirmed cases in Maryland. We had been warned that large groups of people should be avoided and that schools would take an earlier than scheduled spring break. And then all large public gatherings were banned. Bars, restaurants, gyms. I went from being punched in the kidneys by news from far away to being punched in the face from close up.

That evening we got a knock on the door from the nice couple from down the street, new arrivals only a month or two moved in, who wanted to know it we thought it’d be alright with our neighbors (who were out obviously) if they could retrieve their cat from one of their trees. Cat (who’ll go nameless to protect his privacy and his pride among his fellow felines) was not only up a tree, but up the tallest tree. More than half way out on a branch about my forearm’s width and then some. He had been lost for a few days, they said, and somehow been scared enough to scramble vertically about 30 feet or so. What scared him to that extent, and what went through his cat mind about halfway there, we’ll never know.

A tree company was on its way, they told us, and needed to use the backyard. Of course our neighbors wouldn’t mind, we said, they’re animal lovers. I asked if the fire company still did these type of rescues. Apparently not, but it was only two Halloweens ago we had a crew at our house to hack through the floor of our detached sun room to save the life of our misdirected schnoodle. Fun story, but for another time.

We had to leave as the drama was building but when we came back an hour or so later, there was the cat, by his lonesome, on a higher branch. A more slender, higher branch. With a trap nestled in a elbow of the tree several feet below. The tree company’s man had only scared him upward. Setback. But had left the trap to potentially lure him down over time. A treed cat is only good for his present life for a few days, then fatigue and hunger and the overarching stress of it all sets in. I think we can relate to that.

That night it rained. We saw the cat in the tree, balanced like a Wallenda, as the sun went down. We watched the news, read the paper, wallowed in the news. We made plans. We called friends and family. We watched the cat. In the morning, through sheer dread mixed with eternal optimism our eyes were drawn to our side window. And there was the cat, clinging to the branch. It stayed there all day and then at night. We turned the lights out. And I thought about that cat…On top of every damn thing, there was a cat in a tree hanging on for his life.

Day Three. It was raining again and another tree guy was preparing to climb the tree. Cat’s mom, raincoat on and grasping a cold cup of coffee, stood in the backyard with the rest of the crew and a few neighbors, keeping a respectful distance. One more attempt had to be made, she said. Another night would be too much. A net was set up under the tree. It seemed very inadequate to the task but needs must, I guessed. The plan, like all Plan Bs (or Cs) was jerry rigged. Grab the cat, or grab at it, hope for the best, and expect the worst. I had to go, more like I couldn’t stay, and wished her good luck. She smiled and thanked me through tired eyes.

Later, I arrived home and looked up at the tree. Cat was gone. Gone to where? I hadn’t a clue. We were pretty much keeping our distance by this time so a few days went by before we found out. The tree guy grasped, Cat remained motionless and all ended well. And you know, the neighbor of Cat’s owners told us a few days later, Cat doesn’t seem any worse for the experience.

My advice as we deal with this little slice of life we’ve been dealt? Be like Cat. Hold tight. Don’t give up. Hang In There Baby.

Pete Munsey is an area business owner,  political activist, and former newspaper editor and reporter. He resides in Cromwell Valley with his wife and two dogs.